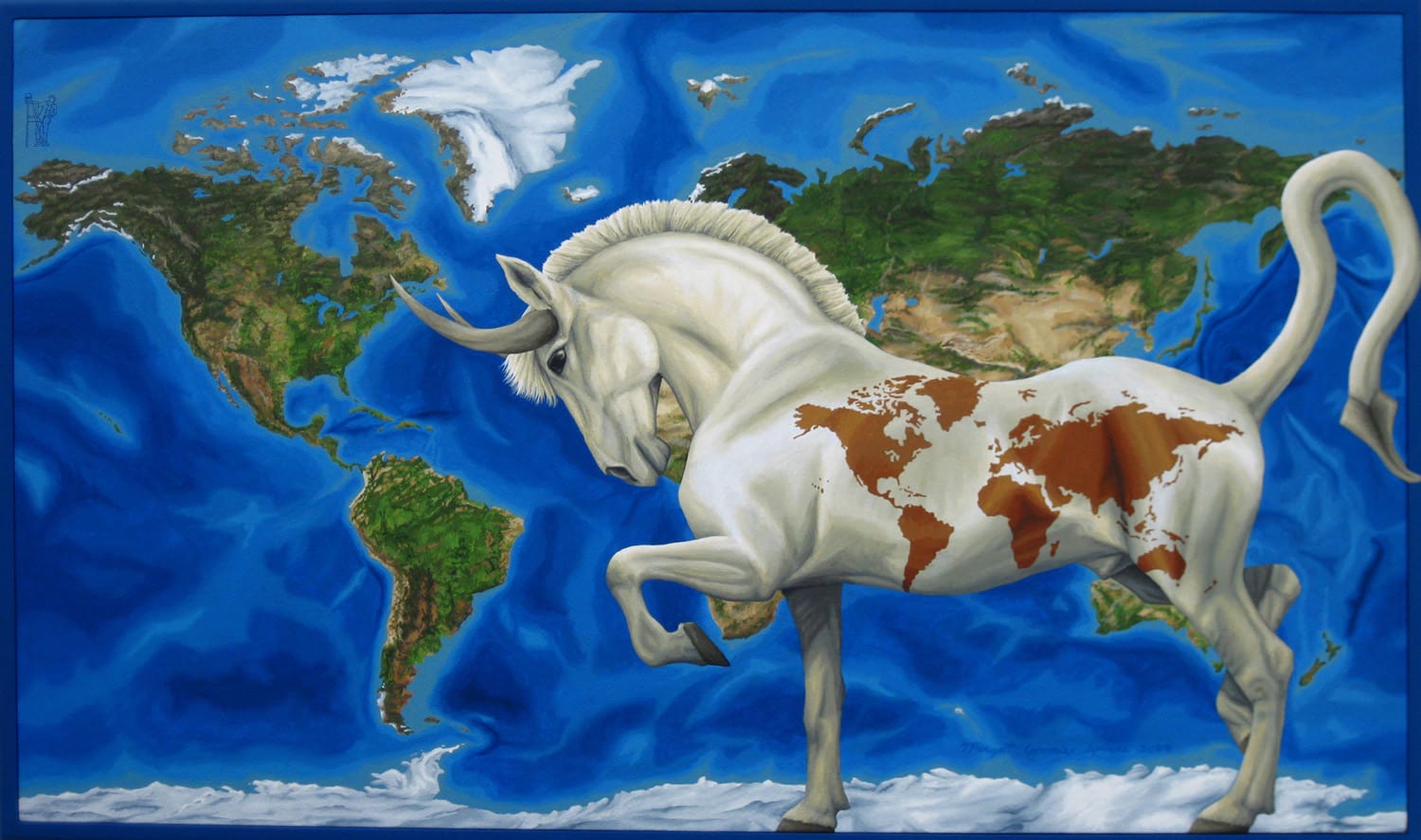 PrevBack
NextNext
$4500
Back to Gallery

I heard a climate scientist on the radio saying that she was alarmed by the changing environmental biology of the Ocean and indications of Climate Change that she was studying, but that she thought the alarming results were unique to her area of study. Then she went to a global conference on the Ocean, and cried when she realized that almost all of the other scientists had very alarming results as well. Climate Change and Ocean Change were no longer theoretical, they were in fact happening. When I heard her speaking, she was on a crusade to raise awareness, and I was inspired to create this artwork with a  prancing horse, which became the first painting in my series ‘Pandora’s Trojan Horse; Exploring Issues around Climate Change’.

Tiny creatures ubiquitous on the surface of all of our oceans called plankton, holds the single most important niche in environmental biology on the planet. Too small to be seen with the human eye, plankton create most of the oxygen we breathe, they are the most important force in carbon sequestration on the planet, and plankton is also the basis of all food chains in the ocean.

Plankton through photosynthesis, supply the planet with between one half and three quarters of all of the oxygen on earth. Over half of the oxygen in every breath you take comes from plankton. Plankton absorbs more carbon dioxide than the Rainforests and all other terrestrial plants combined.

Plankton are being affected by Climate Change. Rising ocean temperatures not only affect the plankton directly, but warmer waters are also altering the ocean currents, that give the plankton life giving nutrients and distribute them around the globe.

Why Pandora’s Trojan Horse? Pandora was a Greek goddess who offered a gift which seemed wonderful at first, but in reality it was a curse. The Trojan Horse represents the threat of industrial expansion, which does not factor in the environmental cost. In Greek mythology, after a long war, a beautiful Wooden Horse was gifted to the people of Troy by the Greeks they had been fighting. The Trojans took the gift inside their city walls, and in the middle of the night, Greek soldiers snuck out of a secret door in the horse and slew the Trojans. The devil attributes cloven hooves, horns and a tail, represent the evils of Climate Change. A map of the World on the horse’s coat completes Pandora’s Trojan Horse, because there is no place on earth that is untouched by Climate Change.

This painting has participated in the following International Exhibits;

This painting has been reproduced in the following book;