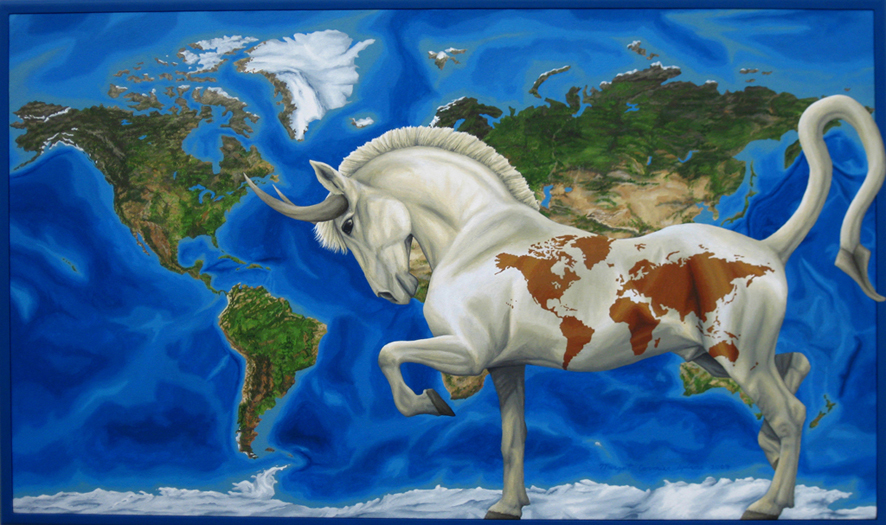 “Pandora’s Trojan Horse; Exploring Issues around Climate Change,” is a series that grew out of love of this wonderful planet we call home, and fear for the future of our world as we currently know it. This Chimera Horse draws inspiration from Greek Mythology, as well as Judaeo-Christian Religion. Pandora, in Greek mythology, opened a jar and released all of the evils into the world, just as pollutants are being released now. Pandora’s Trojan Horse represents the threat of Climate Change and environmental degradation, hidden behind the attractive facade of unlimited industrial expansion. The devil’s horns, tail, and cloven hooves embody the threat posed by mistreating out environment, and the map of the world represents the global implication of our collective inaction so far. This magnificent Pandora’s Trojan Horse meme, is meant to be beautiful to look at, the promise of wonder and prosperity, but it holds within it a hidden threat. The prosperity and benefit of industrial growth, which does not factor in the high environmental cost, has fallen largely to the financial elite, and politically powerful. The price of our changing climate, and environmental degradation will be paid for by everyone else. It will hit hardest among the poor, and in the less developed countries. Some estimates put the cost we are paying today for climate change caused droughts, storms, floods, rising sea levels, melting permafrost, heat waves and fires globally at 1.2 Trillion dollars a year. Climate Change will increasingly affect the bottom line for economies and food supplies worldwide.

Many people believe that there are more pressing priorities than climate change, and while I agree that there are a lot of important issues facing humanity today, all of these issues will be exacerbated if we do not act now on Climate Change. In the earth’s distant past, CO2 or greenhouse gasses were captured and buried with the detritus that accumulates on forest floors and in Oceans. Eventually over tens and hundreds of millions of years, this became today’s fossil fuels such as coal, gas, and oil. Every year we are burning fossil fuels, which took 3 million years to accumulate, and we are releasing back into the atmosphere all the greenhouse gasses that those fossil fuels contained. Most of the “alarmist scientist’s” predictions about Climate Change from the past, have proven over time, to be far too modest.

Each painting and serigraph in my “Pandora’s Trojan Horse; Exploring Issues around Climate Change” series is dealing with a separate area of environmental concern, although like the environment itself they are all interwoven. While I have a definite bias towards preserving a livable planet for our children, I work hard to get my facts as accurate as I am able. I research every topic I create an artwork from, following it from the corporate and government side, as well as from an environmental prospective. My best analysis of the situation is that money, power and continuous short term goal setting for the next quarter, or the next election, spread a thin veneer of truth, over a bubbling cauldron of omission. My goal through my art is not to turn people off and have them walk away, but instead to draw the viewer in and give them something to think about. My paintings and serigraphs are meant to be pleasant to look at, but with an underling message, Climate Change is a real and present danger, please do something. Through my art I hope to be one more voice arguing that it is time to save the planet as we know it now, for our children and our grandchildren.